Puppet is a great product that enables IT infrastructure automation at scale. Produced by Puppet Labs, it is an open source product that also has a paid Enterprise version with additional features. It runs on Unix based operating systems and Windows. It has its own declarative language to allow programmers to script for automating infrastructure provisioning and configuration.

To get started with learning Puppet, I recommend using the Puppet learning Virtual Machine. Alternatively, any default Vagrant box has a Puppet client pre-installed. For the purpose of this tutorial, I will be using Nitrous.io, which I covered in a prior post titled 'Create a dashing.io on nitrous.io'. From that post, follow the basic instructions for creating a free account in nitrous.io and continue below after getting to the console.

In the console, execute the following commands. 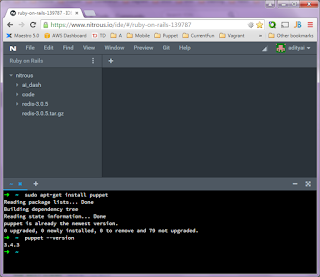