June 03, 2016
My 8 year old just started his summer break. He did so well in school and I am proud of him. He skipped second grade, got into the gold honor roll in every quarter and got a medal for doing that. Last night, I promised to install a new app for him on his iPad mini. I installed Trello and created a board for him while he watched. I showed him how to create cards, add labels to them and move them from To Do, to Doing to Done. I had him create some cards and label them. He could not stop creating cards. I could not convince him to go to bed after that. He created cards for everything he wants to do in the summer and he is not done with creating cards. He even created a card to email a screenshot of his Trello board to his teacher.

Later last night, he was still awake in bed when I checked on him. He told me that he wanted to add three more labels - Math, Science and One-on-One. He wanted a label titled 'One-on-one' for tasks that he wants to do with me and he wants one-on-one attention from me while doing it. A kid is asking for 'One-on-one' time from a parent and he is going to get it, a lot of it.

He got excited when I created these cards for him - 'Learn to assign cards to daddy' and 'Java'. He loves to program but hasn't done any for about an year. He wants to start again.

I used IFTTT service to automate creation of daily tasks like reading, math etc. and these were cards that he created on his own last night. 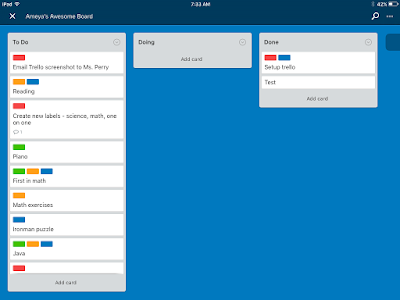 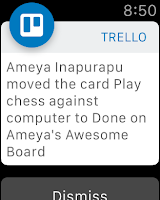 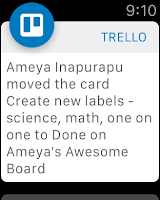