September 27, 2015
Everyone knew about this lunar eclipse. The moon is at its perigee (closest approach to the Earth) and the Earth is getting in between the sun and the moon in such a way that it is completely blocking the sun from the moon. On any other total lunar eclipse, we can see the moon going completely dark and then reappearing slowly. This one on the other hand does not go dark at all. Instead, it turns blood red in color. The sun's rays graze the Earth's atmosphere and hit the moon when the moon is at its perigee. When the sun's rays graze the edge of the Earth's atmosphere, like it always happens during sunrise or sunset, the light turns very orange/red. So, on this lunar eclipse, the suns rays are bending through the edge of the Earth's atmosphere and hitting the moon and that's how the moon turns red.

I had too much excitement on this one. I built my brand new telescope last night so I could use it tonight. But, when the eclipse started, the moon was just above the horizon and behind clouds. So, I had to drive away from home to get to a secluded spot to actually see it. I made it to such a spot and tried to take a picture and then realized on the long exposure that there are wires hanging in the view.

So, I rushed back home as soon as the moon moved to a higher altitude and watched through the telescope. The clouds had cleared fairly well so I could take more pictures that were better than the first set. 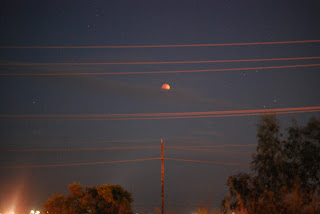 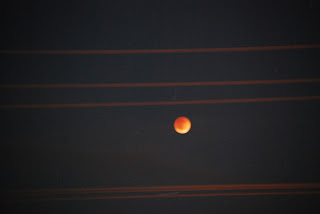 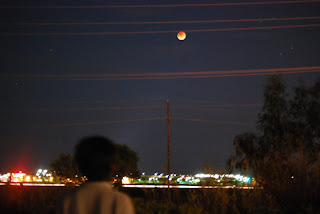 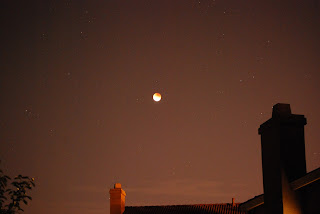 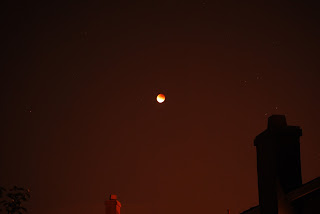 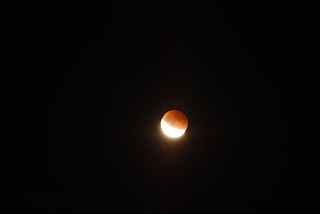 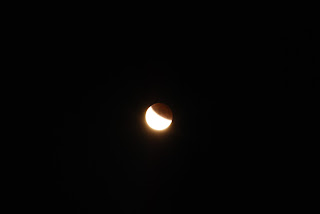